Skip to Main Content
Back to Mini Framed Prints

The mini framed hare print can also be ordered in a black frame, if you would like it in black please leave a note during the payment process or send a separate email with your order to hello@sarahgeefineart.co.uk

The European Hare – lepus europaeus – also known as the Brown Hare is native to Europe and part of Asia. They look very similar to rabbits but are larger, have longer ears & hind legs and breed on the ground rather than in a burrow. Hares can be quite elusive especially now that they are in decline around the British Isles. They can be spotted more easily in March – the month of the mad March Hare – where they can be seen having boxing matches in fields. It was originally thought that the boxing matches were between males fighting over females, in fact the boxing tends to be females fighting off makes if they aren’t quite ready to mate!

The most famous hare from literature has to be Haigha the March Hare from Alice’s Adventures in Wonderland by Lewis Carroll. 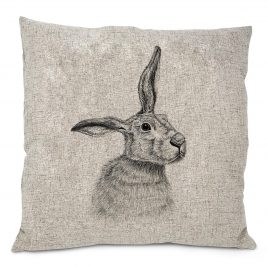 Merlin the Hare on a luxury linen cushion cover with a nice firm insert. Use the drop down menu to select if you'd like it printed on one or two sides
£18.00 – £22.00 Select options 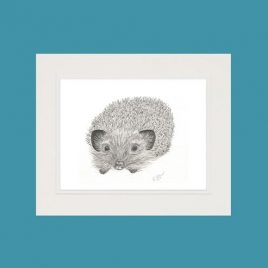 Heather the Hedgehog Fine Art Print. The original pencil drawing took approx 4 hours to complete. Use the drop down menu to select the size you need Prices are for print only
£15.00 – £18.00 Select options 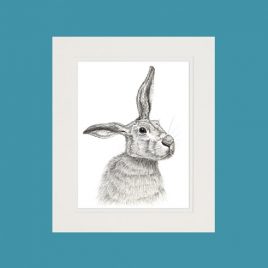 The original Merlin the Hare Drawing A3 in size, mounted and ready to frame Drawn in 2014
£220.00 Add to basket